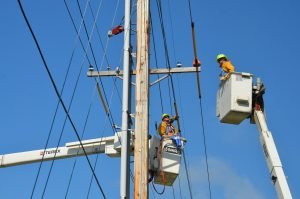 Imagine being quarantined without power.  No Netflix.  No refrigerator.  No video games to keep your kids occupied while you’re trying to work.  No computers to allow you to work.  No power or technology of any kind.  Thanks to linemen, we are able to have all of these things.  Saturday was Lineman Appreciation Day.  Linemen work around the clock to make sure that we have power.  They work under high risk conditions on a daily basis.  Without them, we would not be able to function in our high-tech world.  How did this appreciation day come to be?  On April 10, 2013, U.S. Senate Resolution 95 declared April 18th as Lineman Appreciation Day.

Here are a few facts about the history of linemen:

If you see a lineman, thank them.  If you see anyone on the front lines, thank them, too.  There are many essential workers on the frontlines right now.  We at Brainfiller appreciate ALL of you who are still working to keep life as normal as possible for us during this time.