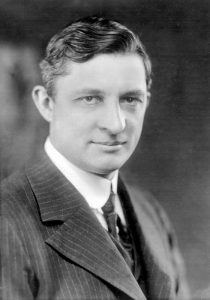 It’s summer and it’s hot!  If you’re lucky enough to be able to enjoy air conditioning, then you have Willis Carrier to thank.  Willis Carrier invented the modern day air-conditioner.  Some might say that he was the “coolest” man ever.

Willis Haviland Carrier was an American engineer born in Angola, New York on November 26, 1876.  In July of 1902, he designed the world’s first modern air conditioning system.  He created this to help solve an issue at the Sackett-Wilhelms Lithographing & Publishing Company of Brooklyn.  This publishing company struggled with the humidity ruining their paper.  Carrier’s invention not only helped cool the air, but it also helped control the humidity.  The authorities in this field then decided that A/C must be able to perform four basic functions: control air circulation and ventilation, control humidity, cleanse the air, and control the temperature.

After many more years of testing, Carrier received a US patent for the first spray-type air conditioner.  They called it an Apparatus for Treating Air.  He received another patent in 1907 for his design of the automatic control system.  This design stemmed from his discovery that “constant dew-point depression provided practically constant relative humidity.”  This discovery later became known as the “law of constant dew-point depression” in the field of air conditioning engineers.  In 1915, he founded the Carrier Engineering Corporation.  After years of earning several awards and honorary doctorates, he passed away on October 7, 1950.