By Jim Phillips
Based on Jim’s article originally published in the
May 2017 Issue of Electrical Contractor Magazine. 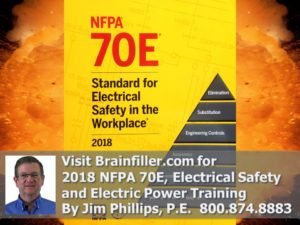 It is hard to imagine that three years have passed since I wrote the 2015 NFPA 70E update article for Electrical Contractor Magazine ECMag.com. My latest article about the changes for the 2018 Edition was just published in last month’s May issue and is also printed here.

Once again there are many significant changes such as a major reorganization of Article 120, the introduction of many new definitions, an even greater emphasis on the Risk Assessment, moving the hierarchy of risk control methods to mandatory language and the deletion of the informational note containing the 40 cal/cm2 reference. So get a jump on bringing your electrical safety and arc flash training programs in line with the soon to be released 2018 Edition of NFPA 70E.

Around 2,500 years ago, the Greek philosopher Heraclitus is credited with the saying, “The only thing that is constant is change.” Who knew this ancient proverb would apply to NFPA 70E, Standard for Electrical Safety in the Workplace? The 2018 edition is right around the corner, and once again, change is a constant theme. From both minor and major revisions to new additions and major reorganizations, this 11th edition contains many changes.

This article does not contain every change, and some language is paraphrased due to space limitations. Since the final document has not yet been formally approved, additional changes are possible before publication. Therefore, refer to the final approved version once it is published.