Our interest in determining accurate onset to second degree burn energy and its significance in computing the arc flash boundary is focused on the prevention of injury to the skin of a human who might be exposed to an arc-flash. During the last two decades different formulas have been proposed to calculate incident energy at an assumed working distance, and the arc flash boundary in order to determine arc rated personal protective equipment for Qualified Electrical Workers. Among others, the IEEE Standard P1584 Guide for Performing Arc-Flash Hazard Calculations [1584 IEEE Guide for Performing Arc-Flash Hazard Calculations. IEEE Industry Applications Society. September 2002] and formulas provided in Annex D of NFPA 70E [NFPA 70E Standard for Electrical Safety in the Workplace. 2012.] and CSA Z462 [ CSA Z462 Workplace electrical safety Standards. 2012.] Workplace Electrical Safety Standard are the most often utilized in the industry to perform arc flash hazard analysis. The formulas are based on incident energy testing performed and calculations conducted for selected range of prospective fault currents, system voltages, physical configurations etc.

Much of the research which led to equations to predict skin burns was started during or immediately after World War II. In order to protect people from fires, atomic bomb blasts and other thermal threats it was first necessary to understand the effects of thermal trauma on the skin. To name the few, are the works done by Alice M. Stoll, J.B.Perkins, H.E.Pease, H.D.Kingsley and Wordie H. Parr. Tests were performed on a large number of anaesthetized pigs and rats exposed directly to fire. Some tests were also performed on human volunteers on the fronts of the thorax and forearms. A variety of studies on thermal effects have been performed and thermal thresholds were identified for different degree burns. We will focus on second degree burn as this is the kind of burn used to determine the arc flash boundary in engineering arc flash analysis studies.

Alice Stoll pursued the basic concept that burn injury is ultimately related to skin tissue temperature elevation for a sufficient time. Stoll and associates performed experimental research to determine the time it takes for second degree burn damage to occur for a given heat flux exposure. Stoll showed that regardless of the mode of application of heat, the temperature rise and therefore the tolerance time is related to heat absorbed by the skin[Stoll, A.M., Chianta M.A, Heat Transfer Through Fabrics. Naval Air Development Center. Sept. 1970]. Results of this study are represented in Figure 1 line (A) along with other studies discussed below. READ MORE 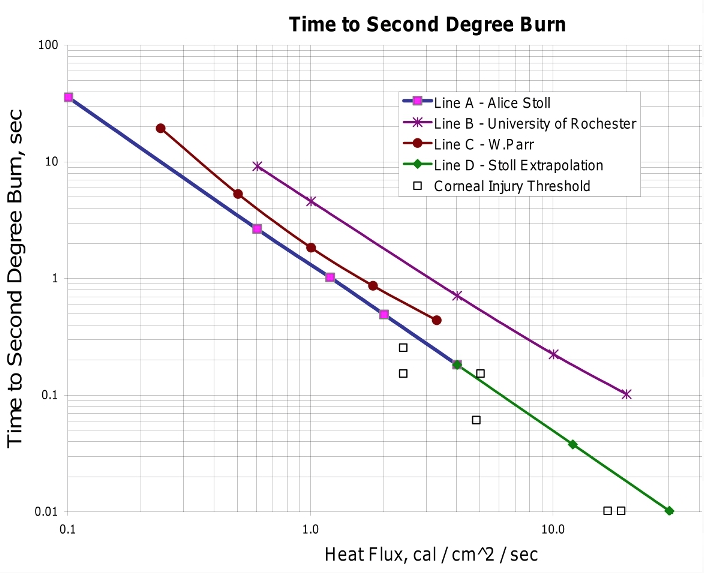