The final part of this series examines incident energy and arc flash boundary calculations for the 480V panelboard example used in this series. IEEE 1584—IEEE Guide for Performing Arc Flash Hazard Calculations defines incident energy as, “The amount of thermal energy impressed on a surface, a certain distance from the source, generated during an electric arc event.” It can be used to determine the arc rating of protective clothing and equipment as part of an arc flash risk assessment.

Two important variables are the arcing fault current and the arc duration. The arcing fault current was addressed in part 2. The arc duration defines the total exposure by evaluating the time current characteristic of the protective device that is expected to operate and clear the arc flash. Part 4 concluded that the device for this example will operate in 1 electrical cycle, or 0.167 seconds.

IEEE 1584 defines the working distance as the distance between the potential arc source and the face and chest of the worker. Incident energy varies exponentially with the inverse of the distance, the greater the distance, the less incident energy and vice versa. IEEE 1584 lists “typical” working distances of 18 inches for low-voltage equipment such as panels and motor control centers, 24 inches for low-voltage switchgear and 36 inches for medium-voltage equipment. However, the specific task must also be considered when defining this distance. For the 480V panelboard example, 18 inches is used.

Table 1 provides a comparison of the incident energy and arc flash boundary based on the VCB, VCBB and HCB configurations. The incident energy increases with VCBB, and increases more with HCB. For panelboards such as this example, VCB is typically used, as well as VCBB if the feeder terminates into a circuit breaker, possibly behaving like VCBB. The temptation to default to the worst case HCB should be avoided unless it is a realistic configuration. It would likely not be used unless a conductor or bus was directed toward the worker.

IEEE 1584 defines the arc flash boundary as “A distance from a prospective arc source at which the incident energy is calculated to 1.2 cal/cm2.” This is the value of incident energy where arc rated clothing and associated protective equipment is required. Tables 1, 2 and 3 also include the arc flash boundary to illustrate the effect of the electrode configuration, enclosure size and arc duration on the boundary.

The calculation results in part 5 indicates the incident energy is low, and in some cases less than 1.2 cal/cm2. This is due to the very fast 1-cycle clearing time. The duration is often considered the most critical variable, and if the duration increases, the incident energy increases proportionally. Table 3 illustrates the effect that longer arc durations may have.

Arc flash studies can be complex, requiring important decisions regarding the variables used. Each must be carefully considered because they can all significantly impact the results.

This article was originally published in the May 2022 Edition of Electrical Contractor Magazine.

END_OF_DOCUMENT_TOKEN_TO_BE_REPLACED

The duration of an arc flash is typically defined by how long it takes an upstream overcurrent device to operate and clear the fault. This requires using the device’s time current characteristic (TCC), which is based on the specific device type, rating, settings (if available) and manufacturer. Recalling my circuit breaker manufacturer days, even the year the device was produced is important as TCCs can change over time.

The TCC for the device used in this example is illustrated in the figure. The horizontal axis is plotted in amps multiplied by a factor of 10. This means that the 10A on the graph is rescaled to represent 10A times 10, or 100A, and the 100 represents 100A times 10, or 1,000A, etc.

The vertical axis represents time in seconds. Each axis employs a logarithmic scale that is nonlinear and used when analyzing a large range of quantities, such as time and current in this case. Instead of increasing in equal increments, each interval, or decade as it is known, increases by a factor of 10. 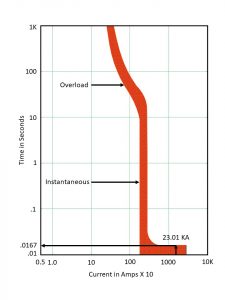 The TCC of a circuit breaker will have at least two distinct parts. The upper left band is commonly referred to as the time-delay or overload region. This may be either a thermal element or an electronic or digital element. The sloping curve is commonly referred to as an “inverse-time” characteristic because current and time are inverse from each other. The more current flowing through the device, the less time it takes to operate. The band, or thickness, is based on the operating and clearing time, as well as manufacturer’s tolerance.

The vertical band in the middle is the transition point between overload and instantaneous operation, commonly called the instantaneous trip setting. If the current falls to the left of the band, the device operates in the time delay region. If it falls to the right, then it trips instantaneously. If the current lands in the middle of the band, it is uncertain which element will operate; although there is specific current value for the transition from overload to instantaneous, there is also a plus/minus tolerance, so the actual point is somewhere within the band. If the arcing current falls within the band, worst case assumes it could trip in the overload region, resulting in a significant time delay.

To determine how long it should take a device to operate for a specific current, the current is located on the horizontal axis and a line is drawn upward until it intersects the top of the curve. Looking to the left indicates the corresponding time.

The graph shown represents the TCC of the 225A circuit breaker used in our example. It is located upstream from the panel under study and is the device that should trip and clear the arc flash.

The second part of this series, “Calculating an Arcing Fault Current” provided the calculated arcing fault current of 23,010A, or 23.01 kA. Specific conditions were used, such as a 1-inch bus gap and VCCB electrode orientation. This current is labeled on the instantaneous part of the TCC toward the lower right of the graph. Drawing a line at this value to the top of the TCC and then drawing a line to the left to determine the duration indicates the device should trip in 0.0167 seconds, or one electrical cycle. This value is used as the arc duration and part of the incident energy calculation in a subsequent part of this series.

When performing an arc flash study, a problem could occur if the arcing current is too low and passed within or to the left of the vertical band. This would indicate the device operates in the time-delay region that would greatly increase the arc duration and resulting incident energy. When the results of an arc flash study indicate a large incident energy at a given location, it often means the arcing current was too low for the designated overcurrent device to trip instantaneously

This article was originally published in the March 2022 Edition of Electrical Contractor Magazine.