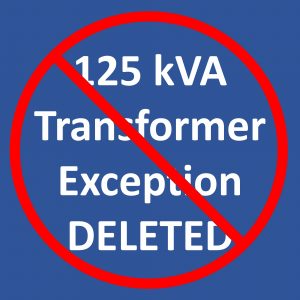 125 kVA – Going, going, gone!
After much speculation about the fate of the 125 kVA transformer “exception”, the 2018 Edition of IEEE 1584 – IEEE Guide for Performing Arc-Flash Hazard Calculations has finally been published and made it official.  The 125 kVA transformer exception has been deleted!

In its place is the new language:

What Happened?
The original language is from the 2002 Edition of IEEE 1584.  It was based on a few tests that indicated sustaining an arc flash at lower levels of short circuit current and lower voltage would be unlikely due to a limited conducting plasma and limited voltage to support the arc.  The original 2002 language stated:

However, subsequent testing for the 2018 Edition of IEEE 1584, along with using new electrode configurations that were introduced indicate that under very specific conditions, it was possible to sustain an arc down to a much lower value of current which was used as the basis for the new 2000 Amp value.  However even at that level, there are no guarantees that an arc would never sustain.  This is why the words were added: “Sustainable arcs are possible but less likely.” Just like it states:  It is unlikely but, never say never.

125 kVA and NFPA 70E?
Some often refer to the 125 kVA exception as having its origins from NFPA 70E and think it was already deleted.  That is not the case.  It was added to the 2009 Edition of NFPA 70E but the language was derived from the 2002 Edition of IEEE 1584.  However, it was subsequently deleted in the next Edition of NPFA 70E although the original IEEE 1584 source remained.  Until now.