Ever since the 2018 Edition of IEEE 1584 – IEEE Guide for Performing Arc-Flash Hazard Calculations was published a few months ago,  people continue to sift through the many  changes that have occurred.  One of the more significant changes is the introduction of a correction factor to adjust the calculated incident energy and arc flash boundary to account for the effect of the enclosure size.

When an arc flash occurs, the size of the enclosure can influence the arc flash hazard.  The smaller the enclosure, the more concentrated the energy is – focusing it more towards the worker resulting in greater incident energy exposure.  The opposite is also true.  Larger enclosures have less of a focusing effect so the incident energy would be less – assuming all other parameters remain the same.

When the first edition of IEEE 1584 was published in 2002, it accounted for the effect of the enclosure by considering one of three different sizes.  Depending on whether the equipment was classified as medium voltage, low voltage switchgear/power or low voltage distribution such as panels and motor control centers, the incident energy and arc flash boundary equations had a slight variation for each classification.  At the time, this was considered a major advancement for arc flash studies. However, even though there were three different enclosure sizes, no method was available to consider any other size – the options were limited. 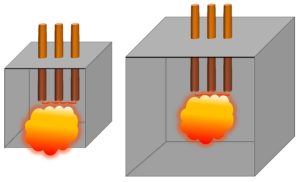 The 2018 Edition provides greater flexibility by including more enclosure sizes to represent more types of equipment.  It also provides a new method to adjust the calculations for any enclosure size.  This adjustment is known as the Enclosure Size Correction Factor (CF).

The new equations for calculating the incident energy and arc flash boundary are based on a normalized 20 in x 20 in x 20 in (508 mm x 508 mm x 508 mm) enclosure size.  If the actual enclosure is larger, the CF can be determined based on actual dimensions and used to calculate a more accurate (and lower) value of incident energy and arc flash boundary. (Figure 1) Not including the CF would result in larger (more conservative) values based on the normalized dimensions.

The process for determining the Enclosure Size Correction Factor includes three different steps as shown below.

Step 1: Equivalent Height and Width – The Equivalent Height (H1) and Width (W1) calculations depend on the actual dimensions of the enclosure as well as the electrode configuration (another major change for the 2018 Edition).   Depending on the enclosure dimensions, the calculation methods are  divided into four categories that I like to refer to as: Small, Medium, Large and Extra-Large.  Small is a dimension less than 20 inches (508 mm).  Medium ranges from 20 inches to 26 inches (508 mm to 660.4 mm), the Large category is a dimension greater than 26 inches up to 49 inches (660.4 mm to 1244.6 mm) and Extra-Large is greater than 49 inches (1244.6 mm).  Each size category has its own unique set of calculations.  Except for the case of a shallow enclosure (see below) the calculation is based on the size of the opening only and the enclosure depth is ignored. 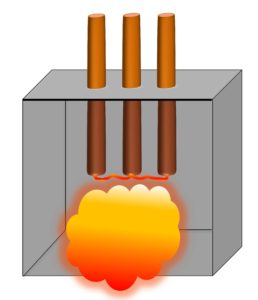 depending on whether the enclosure is “Typical” or “Shallow” as defined by IEEE 1584.  A Shallow enclosure has both a height AND width less than 20 inches (508 mm) AND the voltage is less than 600 V AND the depth is 8 inches (203.2 mm) or less.  For the shallow case as illustrated in Figure 2, the correction factor results in a decrease in the incident energy and arc flash boundary due to the proximity of the electrodes to the opening reducing the effect of the enclosure.

Table 1 illustrates how the incident energy and arc flash boundary vary depending on the enclosure size.  The case is based on a bolted short circuit current of 30 kA, arc duration of 500 milliseconds, conductor gap of 32 mm, 24 inch (609.6 mm) Working Distance, 480 V and an electrode configuration that is VCB – Vertical Conductor in a Metal Box which is the same configuration that was used with the 2002 edition.

The new 2018 Edition of IEEE 1584 includes many significant additions and changes to provide greater modeling flexibility.  One such addition is a new method to adjust the incident energy and arc flash boundary for different enclosure sizes.