The Evolution of Arc Flash Studies

Quite a bit has changed since arc flash studies went mainstream in the early 2000’s.  Standards like NFPA 70E – Standard for Electrical Safety in the Workplace and the latest edition of IEEE 1584 continue to evolve and improve.  Standards like these, coupled with advancements in arc rated clothing and personal protective equipment (PPE) as well as changes to electrical design practices have all helped create a much safer workplace.

The main components of an arc flash study are the calculations of arcing fault current, incident energy and the arc flash boundary.  The final results of the study are used to select arc rated PPE and clothing with a sufficient arc rating and establish what is known as an arc flash boundary. This information also plays an important role for arc flash (equipment) labels and energized electrical work permits. 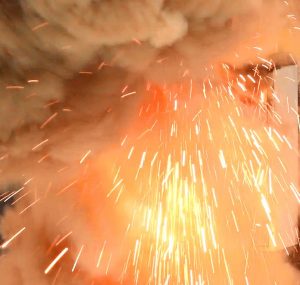 Figure 1. What could go wrong?

Figure 1 gives you an idea of what can go wrong and why an arc flash study and appropriate arc rated PPE is so important.  Although the top priority is to establish an electrically safe work condition so this type of incident does not happen in the first place.

Incident Energy is defined by both NFPA 70E and IEEE 1584 as: The amount of thermal energy impressed on a surface, a certain distance from the source generated during an electric arc event. In other words, it defines the severity of an arc flash and is quantified as calories/centimeter2 (cal/cm2)

Although the IEEE 1584 calculations are known as an incident energy analysis, this is just one component of what most consider an arc flash study.  Additional components may include defining risk control methods for the arc flash, arc flash (equipment) labels and a shock risk assessment. These subjects will be discussed later in future parts of this series.

Results from a short circuit and coordination study are also necessary for determining the available fault current at the equipment location and the arc duration based on how long it takes a specific upstream protective device to operate and clear the fault during an arc flash.  This information can be obtained from previous studies as long as the results have been verified as correct.  If existing studies do not exist or the accuracy can not be verified, new or revised studies may need to be performed.  Relevant standards such as IEEE standards should be used for these additional studies.

Legal
Before we go any further, two items need addressed.  First, the person that performs the study should be qualified to do so. In this age of “there’s an app for that” errors can occur with potentially catastrophic results.  IEEE 1584 defines a qualified person as:

A person who performs arc-flash hazard calculations by using skills and knowledge related to the construction and operation of the electrical equipment and installation and has experience in power system studies and arc-flash hazard analysis.

Second, although I am very involved with many of the standards used for an arc flash study, the views here are mine and may or may not reflect those of any particular standards organization.

Arc Flash Study Example – 480-volt Panelboard
To illustrate the steps for performing an arc flash study, a 480-volt three-phase panelboard was selected as an example.  A large amount of data is required which will be discussed step by step.  The reader is also encouraged to obtain a copy of the 2018 Edition of IEEE 1584 for the complete equations and details. 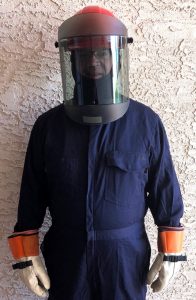 Figure 2. Author in his PPE

Forest, Trees and Data
The old saying “You can’t see the forest for the trees” is appropriate for the arc flash study.  It simply means don’t become so caught up in the small details that you are unable to step back and see the big picture. Just like being lost in the forest, it is easy to get lost in the details of the study.  However, keep one simple concept in mind.  The primary goal of an arc flash study is to select arc rated PPE that is sufficient for the calculated incident energy.

This means that if one assumption results in a calculated incident energy of 4.2 cal/cm2 and another is 4.6 cal/cm2 and another is 5.2 cal/cm2, if PPE similar to that in Figure 2 is selected with a minimum arc rating of 8 cal/cm2, it is considered sufficient regardless of which of the three incident energy values are used.  The effect on the arc flash boundary will be considered later.

To illustrate the concept above, I like to use the analogy of a short circuit study.  Let’s say we are going to evaluate the adequacy of a panel that has a short circuit interrupting rating of 22 kA.  When performing a short circuit study, using different assumptions in the study could result in different calculated short circuit current such as 12.5, 13.5 and 14.1 kA.  But in the end, the 22 kA panel is adequate for all three values.  This statement is not to diminish the importance of using exact data because accuracy is critical.  Just make sure you continue to the see the big picture.

Step One: Data Collection
The data requirements for an arc flash study can be broken down into three categories that include: impedance data for a short circuit study, protective device data to define the arc duration and equipment data used to define the enclosure size, bus gap, and electrode configuration.  Depending on the age of the system and existing documentation, data collection could potentially be a significant portion of the overall study effort.  Often, not all of the data is available and conservative assumptions may be necessary – and documented.

The first step in performing an arc flash study is to create a computer model of the power system under study.  Commercially available software can simplify the process with their vast libraries by enabling the creation of a one-line diagram and entering the necessary data.

Be careful not to fall victim to what I refer to as “data paralysis” This is where all of the data is not immediately available causing the study effort to stall out.  One trick is when data is not yet available, substitute very unusual data that sticks out as a space holder.  That way a preliminary model can be completed.  As an example, if conductor lengths are unknown, temporarily use conductor lengths of 3 feet.  This enables developing a functioning model before the study becomes bogged down.  Once the final data is obtained, the unusual numbers can be replaced. 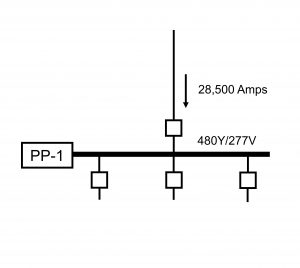 Step Two: Available Fault Current
After the model had been created, the first calculation step is to determine the available bolted three phase fault current at each location.  This is one of the main variables used to determine the incident energy.  I often refer to the fault current as defining the intensity or explosiveness of the arc flash.  A greater current result in a more powerful arc flash.  However, it does not always translate into the greatest incident energy as we will see in later parts of this article.

Step Three Arcing Short Circuit Current
A traditional fault current study from Step Two is used to determine the “bolted” fault current that is normally used to evaluate the interrupting capability of protective devices.  The term “bolted” means the short is a solid connection with no additional impedance at the fault. 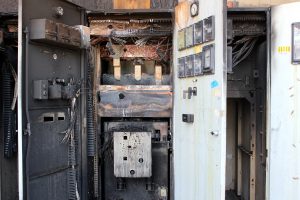 However, during an arc flash, the conductors or conducting object that initiates the fault either melts back or is blown back creating a gap in the current path.  Figure 4 shows an example of what happens during an arc flash test that I conducted several years ago. The fault current flows across the gap ionizing the air and creating a plasma.  Known as an arcing fault current, IEEE 1584 equations require many input variables for this calculation such as:  Bolted three phase short circuit current, bus gap, electrode configuration and voltage.

A table of “typical” bus gaps is provided in IEEE 1584.  At low-voltage, the typical gaps are 25 mm for distribution equipment such as panelboards, switchboards and motor control centers, to 32 mm for low-voltage switchgear. Since this arc flash study example is a panelboard, 25 mm was selected.  The user can use their own defined bus gaps however, it must be noted that the gaps can vary within this same piece of equipment and with different equipment.

In the next part of this series, the results will be analyzed using different electrode configurations, arc duration and enclosure sizes.  This article is based on the series originally published in the September 2021 issue of Electrical Contractor Magazine