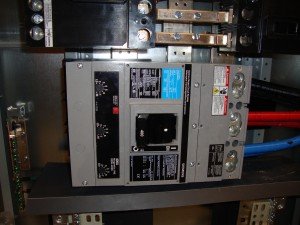 Adjustable Circuit Breakers
Many circuit breakers have setting adjustments that can be used to define how the device responds to short circuit currents.  Adjustable circuit breakers as a minimum, will have an adjustable instantaneous setting that defines the level of current where it will trip with no intentional time delay. a.k.a. instantaneous trip.  If the abnormal current exceeds this current level, the device trips instantaneously – if the current is less than this level, it will trip in the time delay or overload region.

Other more complex devices such as electronic trip and digital breakers can have a multitude of settings that are used to define an elaborate tripping characteristic.  The preferred method for determining the settings for these devices is to perform a coordination study. This requires that the various protective device in the electric power system be analyzed to determine how they should be set so only the device furthest downstream nearest the load trips in the event of an abnormal current.  This allows the other devices towards the source to remain closed and results in the minimum amount of an outage.

However, there is another objective and that is to ensure that the protective device also responds quickly enough to provide suitable protection of the conductors, transformers, motors and other electrical equipment.  The recommended settings should take into account both selective coordination and protection.

Changing the Setting
As mentioned, when a protective device trips, often the first response is to simply reset it and see what happens.  More often than not, if a breaker tripped once, it will probably trip again because simply resetting it did not solve the root cause of the problem.  The second time the device trips, many “experienced” people will increase the setting thinking that it tripped because the setting was too low and not considering why it tripped. Changing a device setting without proper analysis of its impact could reduce selective coordination with other devices and quite possibly reduce the level of protection.

The protective device setting’s impact on the arc flash hazard is so important that NPFA 70E 130.5(G) Incident Energy Analysis Method requires that the arc flash risk assessment “shall take into consideration the characteristics of the overcurrent protective device and it’s fault clearing time” and “shall be updated when changes occur in the electrical distribution system that could affect the results of the analysis.”  In addition, the “Incident energy analysis shall also be reviewed for accuracy at intervals not to exceed 5 years.” This is to account for changes which can include protective device settings that can affect the results of the of the arc flash risk assessment.

Don’t!
So, if a circuit breaker trips, – don’t simply re-set it until you find out why it tripped.  Not because I said so, but because NFPA 70E says so.  According to the 2018 Edition of NFPA 70E:

130.6(M) Reclosing Circuits After Protective Device Operation: After a circuit is de-energized by the automatic operation of a circuit protective device, the circuit shall not be manually re-energized until it has been determined that the equipment and circuit can be safely energized.  The repetitive manual reclosing of circuit breakers or re-energized circuits through replaced fuses shall be prohibited.  When it is determined from the design of the circuit and the overcurrent devices involved that the automatic operation of a device was caused by an overload rather than a fault condition, examination of the circuit or connected equipment shall not be required before the circuit is re-energized.

If you ultimately make a setting change, review its impact not only on the protection and coordination but also on the calculated incident energy because the next time it trips, there could be a very large BOOM!