Yes, you read the title correctly – Second degree burns, my wife and a chili cookoff! And it all took place at home. But, before I get into that story, let me back up a bit.

Standards such as NFPA 70E, IEEE 1584 and several others address the arc flash hazard in terms of incident energy with the severity quantified in terms of calories per square centimeter (cal/cm2).  The generally accepted value for “the onset of a second degree burn” is 1.2 cal/cm2 as shown in the following examples.

The NFPA 70E definition of the Arc Flash Boundary contains an Informational Note that references the “the onset of a second degree burn on unprotected skin is likely to occur at an exposure of 1.2 cal/cm2 “

“The onset of a second-degree skin burn injury based on the Stoll curve.” is also found in Informational Note 3 of the definition of Arc Rating.

NFPA 70E 130.7(C)(6) states that: “Employees shall wear arc-rated clothing wherever there is a possible exposure to an electric arc flash above the threshold incident energy level for a second degree burn (1.2 cal/cm2)” There are a few other locations such as Table 130.5(G) where this value is also referenced.

Even IEEE 1584 contains “An incident energy of 1.2 cal/cm2 is likely to cause the onset of a second-degree burn” in Annex B2

To better understand the severity of burn injury, the National Institute of Health provides the following definitions:

First-degree burns damage the outer layer (epidermis) of the skin.

Second-degree burns damage not only the outer layer but also the layer beneath it (dermis).

Third-degree burns damage or completely destroy both layers of skin including hair follicles and sweat glands and damage underlying tissues.

Since the “onset of a second degree burn” is the transition from first to second degree, what do these burns look (and feel) like?  To help illustrate this, I will use my wife as an example (and we are still married after almost 40 years).

She is quite a chef and sometimes will get into an almost “maniacal” cooking mood.  Sauces bubbling, spices flying, knives chopping vegetables at an alarming rate.  – When that begins to happen, I know it is time to run and hide.  On one occasion a few years ago, she was on one of those maniacal cooking missions when I heard a metal pan hitting the tile floor accompanied by very loud shrieks and screams. 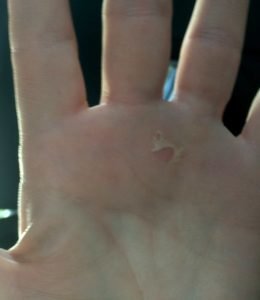 This was not normal – even for maniacal cooking.  So being very concerned, I run into the kitchen looking past everything covered in sauce and see her bent over holding her hand – still screaming.

She had reached into the oven and grabbed a hot metal skillet by the handle – bare handed (no PPE i.e. oven mitts).  This resulted in a first degree burn along the base of her fingers and one small blister.

Being the nice guy that I keep reminding her that I am  I take her to the kitchen sink and run cool water on the injury and try to calm her down.  While standing behind her, I noticed my cell phone on the kitchen counter near the sink so I cued up the camera and continued the calming effort.  “There, there – let me take a look at your hand.”  SNAP, I got the picture.  Of course, this did not go over well but it does make a good illustration.

The pain began to fade by the next day and about a week later her hand began returning to normal; except for a small blister (Figure 1). Keep in mind arc flash protection is to minimize the burn injury but “the onset of the second degree burn” still hurts!

Two years ago, she tried to outdo herself by taking burn injury to the next level.  It was almost Halloween and for years she has participated in a local Chili cookoff as part of a children’s Halloween event.  But, this time, her competitive cooking streak kicked in – she decided it was time to try and win the cook off.  Her eyes began to spin – I recognized the warning signs and got out of the way! 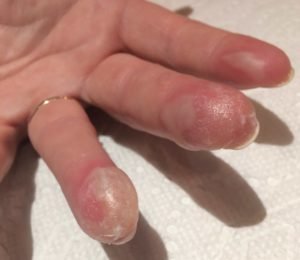 While manically cooking her (hopefully) award winning Chili, I heard what was an all too familiar shriek and once again went running into the kitchen.  This time it was much more serious.  A plastic microwave splatter screen had been resting on the electric stove top and the burner came on.  The plastic began to smoke and melt and with quick reflexes, she grabbed a spatula to scoop it up and toss it safely into the sink.  But it did not go as planned.  The splatter screen was molten plastic by then and as she scooped it, it dripped down onto her fingers.  The result – full blown second degree burn injury and uncontrollable screaming.

This time it required a trip to the local urgent care.  The pain took many days to subside and the blisters lasted for quite some time.  A few days after the incident while helping change the bandages, she held her blistered fingers up and said “I suppose you want a picture of this too?” SNAP! – Yes! (Figure 2) 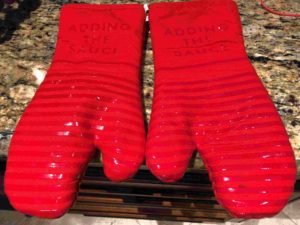 Now I had a safety dilemma.  On both occasions she was not wearing appropriate PPE.  From that point of view, I should have stopped work and removed her from the work site (kitchen).  However, looking out after my own self-serving interests (I am not a good cook), I had to think of an alternate approach.   Plan B was to provide her with new PPE and a bit of re-training i.e. “wear these new oven mitts next time”(Figure 3).  So far, (knock on wood) over two years have passed without any more incidents.

Although these were not electrical burns and were limited in size, you get the idea.  Burns happen without warning.  Some can be very painful but you quickly recover.  Others can be much more serious and even deadly.  So, remember, always wear your PPE – even in the kitchen!

By the way – She won the Chili cookoff.