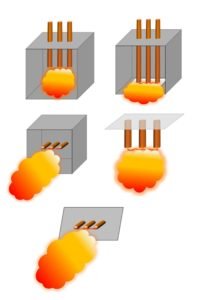 The most frequently asked question that I receive regarding the 2018 edition of IEEE 1584 is:

“How do I determine the electrode configuration?”

With the original vertical electrode configuration, when an arc flash occurs in an enclosure, the arc is driven away from the source, down the electrodes and towards the bottom of the box and spills out of the front. Research has demonstrated that if vertical electrodes are terminated into an insulating barrier, the arc hits the barrier and the plasma cloud is directed more towards the enclosure opening.

To provide greater modeling flexibility for equipment, five different electrode/bus configurations are now included in the 2018 Edition of IEEE 1584 which include:

At the present time, the new standard is only a few months old and people are trying to determine what to make of it.  This problem (and confusion and uncertainty) is not new.  A similar situation occurred when the original 2002 edition of IEEE 1584 was first released.  People found themselves trying to sort out the details of how to use the new concepts.

Some of the initial uncertainty and confusion were questions such as: Do you measure the actual bus gaps or use the defaults from IEEE 1584 that were also included in arc flash software.  Do you dare cut the arc duration off at 2 seconds? – Most people did not use 2 seconds in the early days.  How much detail was really necessary. The list went on. These questions may seem trivial today but at the time they were considered quite significant.

Over time, the industry converged into a more standardized practice.  The website: ArcFlashForum.com  which began in 2007 also helped out a bit.  Each week, I would ask a survey question known simply as “Question of the Week” to gauge how people were addressing certain issues.  Keep in mind this was long before the social media platforms that exist today.  Questions about labeling and colors/signal words, working distance, conductor gaps, and years of similar questions, helped others realize they were not alone and could see how others were addressing certain issues.

With the introduction of the 2018 Edition of IEEE 1584, I am at it again with the “Question of the Week.”  A few questions have already been asked about specific issues regarding 2018 IEEE 1584 but the biggest one is how to address the electrode configuration. It is a new concept and with anything new comes second guessing, uncertainty and confusion.

This past week, Electrode Configuration was the subject of the “Question of the Week” at ArcFlashForum.com

How will you/consultant/company address electrode configurations?

Although far from a scientific survey, the choices and results at this moment in time were:

So far there seems to be a tie between “Review actual equipment bus/conductor configuration” and “Not sure yet.”  The “Not sure yet” group is simply history repeating itself as was the case in 2002.

To assist people in determining electrode configurations for equipment, a new section has been added to the ArcFlashForum.com   It is known as:

Here people can post photos of various types of equipment for the users to discuss and analyze what the possible configurations may be.

The goal is to develop a public library of equipment and configurations to help others.  The 2018 edition of IEEE 1584 has many new options available for arc flash modeling.  Now it’s time to sort it all out!