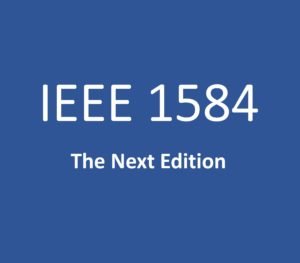 It has been sixteen long years since IEEE 1584 – IEEE Guide for Performing Arc-Flash Hazard Calculations was first published in 2002.  This standard was highly celebrated back then because for the first time there was an internationally recognized standard that provided a method to calculate the arcing short circuit current, incident energy and arc flash boundary.  The results of these calculations are often listed on arc flash/equipment labels and have become an integral part of arc flash studies and risk assessments globally.

However, it did not take long before the focus began to shift towards what comes next.

The growing list of what comes next was becoming quite long. It was obvious that the next edition of IEEE 1584 would be a project of epic proportions requiring significant financial and technical resources.  To rise to this challenge, a different approach would be necessary and a collaboration was created between IEEE and NFPA.

The research and testing by the collaboration project finally got underway and resulted in a new and more detailed preliminary model and new equations that were handed off to the IEEE 1584 working group.  Additional refinements were made to the model and then it was finally integrated into a draft of the next edition of the standard.  Several more revisions and drafts were developed along the way and now the current version (Draft 6) is finally close to being published.

What Changed?
A frequently asked question is: “What has changed from the 2002 Edition to the next edition of IEEE 1584.”  Perhaps an easier question to answer is what has NOT changed.  Well, the next edition still has the same title!

The 2002 Edition was based on more than 300 arc flash tests used to develop empirically derived equations.  The range of validity is from 208 V to 15,000 V – three phase and for bolted short circuit currents from 700 Amps to 106,000 Amps.  The new edition is based on almost 2000 additional tests spanning a wide range of voltages, configurations and parameters.

Let’s take a look at the major changes:

New Electrode / Bus Configuration
The 2002 edition was based on arc flash tests with electrodes in a vertical orientation as shown in Figure 1. When an arc flash occurs using the original model, the arc plasma is driven towards the bottom of the box and often spills out of the front.

To provide greater modeling flexibility for equipment, five different electrode/bus configurations have been included in the testing program and subsequent model development which include:

125 kVA Transformer Exception
The 2002 Edition contained language that many refer to as the “125 kVA transformer exception” This language states:

This language was based on a few tests that indicated lower short circuit currents at lower voltages may be less likely to sustain an arc flash resulting in a lower incident energy.

However, subsequent IEEE 1584 testing has demonstrated that although not very common, it may be possible to sustain arcs briefly at lower levels of short circuit current resulting in a greater incident energy. Based on the results of additional testing, the 125 kVA language has been deleted.  Instead, new language states:

Sustainable arcs are possible but less likely in three-phase systems operating at 240 V nominal or less with an available short-circuit current below 2000 Amps.

Voltage
Although the 2002 edition is valid for voltages from 208 V to 15,000 V, only two different equations were provided for the arcing short circuit current.  One for systems operating from 208 Volts up to 1000 Volts and one for 1000 Volts to 15,000 Volts.  This left a discontinuity at 1000 Volts and further refinements were needed. In addition, the 2002 edition required a calculation factor (Cf) for incident energy calculations at voltages less than 1000 Volts. The next edition uses 3 voltages and also includes interpolation for other voltages for greater accuracy.  The three voltages include 600, 2700 and 14,300 volts.

Grounded/Ungrounded
The 2002 edition made a distinction in the results based on whether a power system is grounded or ungrounded/impedance grounded.  During the arc initiation stage when the fuse wire is melting, the arc can be very erratic i.e. unbalanced.  The erratic arcing created a difference in the arcing current and incident energy during this very brief period that could be influenced by how the system is grounded. The new model is based on the more stable arc so there is no difference in the calculations based on grounding.

Arcing Current Variation Correction Factor
The first addendum for the 2002 edition of IEEE 1584 was published in 2004.  Known simply as IEEE 1584a, this addendum added an 85% factor for reducing the calculated arcing short circuit current for systems up to 1kV.  The reduction was to account for variations that may occur in the actual arcing current which could affect how fast a protective device may operate.  If the reduced arcing current resulted in a longer clearing time and larger incident energy, results based on the adjusted current would be used.

Instead of a fixed 85% factor, the next edition includes an “Arcing Current Variation Correction Factor” based on using a new equation.  This represents a more accurate arcing current variation based on the electrode configuration as well as other factors and applies for all voltages.

Enclosure Size Correction Factor
The enclosure size can have a significant impact on the arc flash energy being expelled and reaching a worker.   To address this, additional enclosure sizes were included in the test program.  An enclosure size correction factor has also been introduced to adjust the incident energy for smaller and larger enclosures.  For equipment operating at voltages less than 1000 volts, the next edition now makes a distinction between “Shallow” enclosures which are less than eight inches in depth and “Typical” enclosures that are greater than eight inches in depth.

Two Seconds
There is language in the 2002 edition that suggests the arc duration may be capped at 2 seconds if calculations indicate that a protective device may take an unusually long time to operate.  Judgment must be used to evaluate if a person would have room to react and jump out of the way within 2 seconds.

This leads to another question: Will the 2 second rule remain?  The simple answer: Yes!

What’s next?
Just because the next edition of the IEEE 1584 standard is finally about ready to be published doesn’t mean arc flash research and standards development is finished. Quite the opposite.  After 16 long years, there will undoubtedly be celebration – but then we will once again begin looking at what’s next!

When the next edition of this standard is published, you can purchase your copy at: IEEE SA Standards Store