IEEE 1584 – Where It All Began – 2002
A lot has happened since 2002 when IEEE 1584 – IEEE Guide for Arc-Flash Hazard Calculations was first published. The development of this land mark document included conducting over 300 arc flash tests which were used to create the empirically derived equations. Applicable for three phase calculations and voltages ranging from 208 volts to 15,000 volts, four main calculation methods are the backbone of this standard and include:

Let’s Collaborate
When IEEE 1584 was first introduced, it not only became the primary standard for arc flash studies in the United States and North America, it also quickly gained widespread global acceptance.  Not wanting to rest on the accomplishment of producing the 2002 edition, the focus began to shift towards improving what we have and exploring other areas. Everyone began to have the same question: How do we take this standard to the next level?

The arc flash tests used for the 2002 edition were based on the electrodes placed in a vertical configuration similar to Figure 1. Thoughts began to turn towards answering new questions . “What if the electrodes were horizontal instead of vertical?” “What if the enclosure was a different size?” “What if it was a DC arc flash?” The “what if” list quickly began to grow which helped define what the next edition of IEEE 1584 might include.

Questions were not just coming from people within the IEEE community, they were also coming from NFPA which publishes NFPA 70E Standard for Electrical Safety in the Workplace. Since research and testing requires significant financial resources, a collaborative effort was developed where both IEEE and NFPA would participate. This new collaboration combined with the financial support from many companies and individuals in the industry would result in a multiyear project that would include conducting over one thousand new tests, as well as new research and analysis to take what we know about arc flash to the next level.

Caution! Science in Progress
Although the testing and research has been ongoing for several years, the work is not yet complete and continues today. In addition, much of it is still in the proprietary review stage (sorry, no fair peaking). Data analysis, additional testing, fine tuning of the models are just a few of the many tasks that remain – it is still a work in progress. This means that information in this article must be considered preliminary and is subject to change. 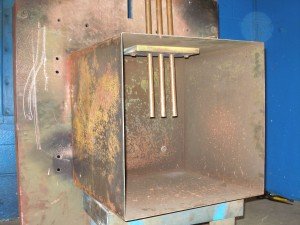 Electrode / Bus Orientation
The 2002 Edition of IEEE 1584 was based on three electrodes placed in a vertical orientation as shown in Figure 1. When an arc flash occurs with this orientation, the arc plasma is driven towards the bottom of the box and often spills out of the front.

When the electrodes are placed horizontally, the arc plasma is directed from the ends of the electrodes outward. Research has also indicated that if vertical electrodes are terminated into an insulating barrier, the arc hits the barrier and the plasma cloud is directed more towards the enclosure opening. The barrier configuration is relatively common and represents conditions such as when conductors terminate into a terminal block or other device.

A total of five different bus configurations have been included in the testing program which include: 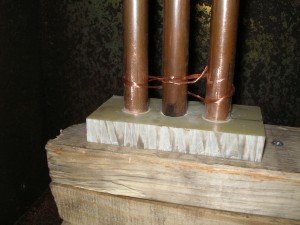 The new test results of have been used to develop preliminary equations for further review by the committee and possible inclusion in the new standard. Presently, the new equations have not been made public since they continue to be refined as research continues.

With all of the different electrode orientations combined with many variables such as gap distance, voltage, enclosure size and others, the new standard has the potential to make modeling more complex. Fortunately a task group was created that I have the privilege of leading, which is exploring the use of the new equations for equipment modeling.

More than just Incident Energy
In the past, the main focus of an arc flash study was to predict the prospective incident energy. However, other areas are now being investigated.

Blast Pressure – Some testing has been conducted to evaluate blast pressure from an arc flash. One such test was conducted using a short circuit current of 20,000 amps with a 25 mm arc gap and 12 cycle duration. It resulted in pressures between 110 to 200 pounds of force that a worker could experience over a 1 ft x 1.5ft area. Although this specific test at the lower level of fault current may not necessarily result in a crushing blow, it could knock a worker over possibly contributing to other injuries.

Sound Pressure – Sound pressure from arc flash can result in severe hearing damage. Some testing at 4,160 volts has produced average sound levels upwards of 155 to 160 db at distances three meters or more. The Sound levels are affected by the short circuit current as well as the size and shape of the testing lab.

Light – When an arc flash occurs, there can be a blinding flash of light that can cause eye injury and blindness. As part of the testing program, some light (luminance) measurements have been performed. As a frame of reference, it has been stated that the luminance level on a bright summer day will have a midday ground level illumination on the order of 100,000 lux where lux is a measure of light intensity. Luminance measurements for several different short circuit current levels have resulted in recordings of tens of millions of lux during the arc flash.

Enclosure Size – It is widely accepted that the incident energy from an arc flash can also be influenced by the enclosure size. The project team has been evaluating the effect of enclosure size and consideration is being given to the use of adjustment factors for different dimensions as part of the calculation process. 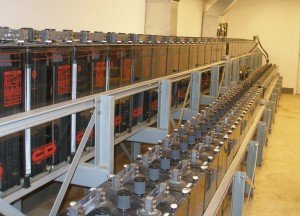 DC Arc Flash
Large rectifiers, DC traction power systems and large battery systems are just a few of the possible sources of a DC arc flash. Although the 2002 Edition of IEEE 1584 did not consider DC arc flash, there has been some private testing and technical papers developed on the subject. The hope is that DC arc flash testing will be conducted in the final phases of this project.

125 kVA Exception
Often referred to as the “125 kVA Exception”, the 2002 Edition of IEEE 1584 contains language that permits a study to exclude calculations on circuits with voltages less than 240 volts and fed by transformers 125 kVA and smaller. This exception was based on a few tests that indicated if an arc flash occurs at lower voltages and also with a lower magnitude of short circuit current, it would be difficult to sustain the arc and would result in a lower level of incident energy.

Since 2002, there has been significant testing that indicates under certain conditions, it is possible to sustain an arc flash at much lower levels of short circuit current. Although this exception is still under evaluation and review, it is likely that the cut off will be greatly reduced from the existing 125 kVA transformer size.

What is an Arc Flash Study – IEEE 1584.1
If you ask ten different people what is an arc flash hazard calculation study, you will likely receive ten different answers. The answers can range from:

“Don’t you just take some data, dump it into a program, and out pops some labels?”

To: “It requires very complex system modeling, analysis, and data gathering and is quite a massive undertaking”

Also, many arc flash studies were being commissioned by safety managers that had limited knowledge of what is involved in an arc flash study. This made it difficult to compare proposals from various consultants.

Since there are so many widely varying opinions about what an arc flash study is and what should be included, the IEEE 1584 committee formed a separate task group to address this problem. I had the privilege of being one of the two people to lead this group which developed what would become known as “IEEE Guide for the Specification of Scope and Deliverables Requirements for an Arc-Flash Hazard Calculations Study in Accordance with IEEE Std. 1584.” This new document would receive the designation: IEEE 1584.1 or “dot one” as we all began to call it.

The objective of this soon to be released guide is to provide direction for the information needed and suggested deliverables of an Arc-Flash Hazard Calculation Study. It also outlines the minimum recommended requirements of the study.

Now in the home stretch of the standards making process, IEEE 1584.1 “dot one” should be available later this year from IEEE.

Fast Forward – What’s Next?
Over 1000 new arc flash tests have been performed so far with many more to be conducted. The additional testing combined with a detailed review and analysis of results, validating the models and developing new text for the next edition, will take some time. Once a complete draft of the standard is ready to go, the balloting process begins. Comments are addressed and additional changes may occur. Yes it will take some time to complete, but the effort will be worth the wait – The best is yet to come!