Wind and Solar Electrical Safety – Rising to the Occasion – A few months ago I was driving home from the Los Angeles area and suddenly found myself surrounded by thousands of wind turbines lining both sides of Interstate 10. Even though I have made this trip many times before, I am still in awe at the scale of it all. Looking through my 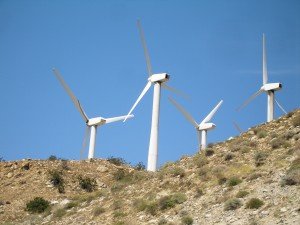 windshield (but still watching the road) at the
miles of wind turbines and substations that make up the San Gorgonio Pass Wind Farm, I began to wonder how much electricity is actually being produced from these giant machines. I later learned it is 615 Mega-Watt (MW) facility.

More recently, I was at another large scale renewable energy facility. This time it was a photovoltaic (PV) plant known as Agua Caliente located in Yuma, Arizona. This site recently observed a major milestone as its capacity hit the 100 MW ac mark. When completed, the total capacity will reach 290 MW ac making it the largest PV facility on planet Earth. Once again, I was in awe as I was literally looking out over a sea of PV modules.

As we continue to hear the battle cry for American energy independence and renewable energy, it is exciting to see how tens of thousands of people are on a crusade to meet the challenge. I finally realized this is where my “awe” came from. It wasn’t so much the physical scale of the systems as it was the sheer number of people involved to make it all happen. Yes, we still know how to rise to the occasion.

Wind and Photovoltaic – The Numbers
Wind: The statistics speak for themselves. According to the American Wind Energy Association (AWEA) by the end of 2011, there are 46,919 MW of utility scale wind power generation capacity. For 2011, 6,810 MW of new capacity was installed and as of the end of 2011, there was an additional 8,320 MW under construction.

According to the National Renewable Energy Laboratory (NREL), the United States has an on shore wind resource potential of 10,400,000 MW and an additional 4,150,000 MW available offshore. 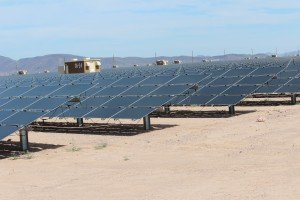 The Agua Caliente project may be on track to become the world’s largest PV power plant; however that record won’t stand long. There are two much larger projects already under construction in California topping out at 550 MW ac each. And this is just the tip of the PV iceberg.

Green = Caution
Green = Caution? This language does not exist anywhere in the ANSI Z535 standard which is used to define signal words and colors. Although energy sources such as wind and PV are commonly referred to as “green energy”, electrical hazards such as shock and arc flash happen to be color blind – and sometimes they can be well hidden. In fact, the same cautions that apply to conventional electrical sources also apply to “green” ones.

Electricity (and electrical hazards) from the Wind
Harnessing energy from the wind has been around for centuries. Although the basic concept may not be new, today’s wind turbines have taken it to a whole new level. Many land based wind turbine generators (WTG), have capacities now reaching several Mega-Watts each and the envelope continues to be pushed.

With wind turbines sprawling out over a large area, sometimes covering several miles, a wind farm requires a large distribution system to connect them all together and tie them to the utility grid. The “collector system” as it is called, is made up of underground and sometimes overhead medium voltage feeders frequently operating at 34.5 kV.

The output voltage of a WTG typically ranges from 480 to 690 volts and connecting it to the collector system requires a step up transformer. The power from the individual WTGs is combined and connected to a more traditional substation where it is ultimately interconnected with the electric utility grid.

Just like a more traditional electrical system, the shock and arc flash hazards must be considered as part of electrical safety practices. However, when it comes to the arc flash hazard, it may not be straight forward. If an arc flash occurs, the resulting incident energy will not only be dependent on the short circuit current from the individual WTG, but all of the other WTGs that are on line as well. An additional and often more menacing problem, is the utility system will also contribute to the arc flash and utility short circuit currents can be quite high. Depending on the operating speed of protective devices, this could result in a very dangerous and potentially deadly event.

The arc flash hazard has caught the attention of OSHA. In 2009, OSHA reported the investigation of 32 arc-flash accidents at wind farms. As one example, in 2010, OSHA investigated an arc flash at a wind farm where a worker received severe.

Fast forward to 2012, OSHA is now targeting the wind energy industry with a National Emphasis Program (NEP). OSHA announced that the operation and maintenance of wind turbines fall under the same regulations that govern electrical safety of more traditional power plants.

Electricity (and electrical hazards) from the Sun
There may be some similarities between utility scale PV installations and conventional power generation, but there are also some major differences.

One key difference is with the electricity production itself. Large arrays of photovoltaic modules are lined up basking in the sunshine. No sound, no moving parts and no indication at all that anything is happening – this in itself has created an unintended hazard. If the PV modules are just quietly sitting there, how can there possibly be a hazard?

No Sound + No Movement ≠ No Hazard
Without any audible or visual triggers, a person can be lulled into a false sense of security which has become a safety concern among the PV community. Working within the PV culture requires that personnel must be trained to understand that you don’t touch anything during daylight hours.

The single biggest difference with a PV system is the energy source – the sun. Since you can’t exactly flip a switch and turn it off, photovoltaic modules are always energized during the day. This seems to create a problem when trying to establish an electrically safe work condition according NFPA 70E Standard for Electrical Safety in the Workplace. This condition requires among many steps, de-energizing and verifying the absence of voltage.

I recently had the opportunity to discuss large scale PV systems with Mr. Rob Rynar of Tempe, Arizona based First Solar, which is building the Agua Caliente plant as well as the two 550 MW plants in California. I asked him the question: “How can you ever establish an electrically safe work condition?”

There was a slight chuckle and then he said “it’s easy. We have a scheduled outage once every 24 hours.” He paused for a moment and then continued. “It’s called night time. Any live work is simply deferred until non-daylight hours.” Even after the sun goes down, they always treat the system as if it were energized since there is still a possibility of some minimal power production at night. In addition, arc rated protective clothing and personal protective equipment is always used whether it is day or night.

Typical voltages on utility scale PV systems are increasing all the time and many systems operate upwards of 1000 volts dc. There is pressure to further increase this to upwards of 1500 volts. This means PV systems are not immune from the electric shock hazard. Fortunately, the 2012 Edition of NFPA 70E introduced Table 130.4(C)(b) for approach boundaries for dc voltage systems which can be used to help address this hazard.

Although the arc flash hazard technically exists on the dc side of a PV system, it is not nearly as big of a hazard as on the ac side. PV modules are inherently current limiting meaning they do not individually produce much short circuit current. The larger arc flash hazards exist on the inverter/utility ac side of the system. Short circuit current flowing from the utility interconnection can result in a significant amount of incident energy requiring special attention to the proper selection of arc rated protective clothing and PPE. 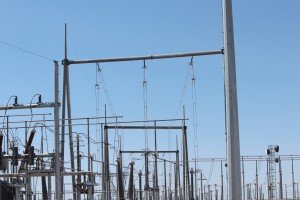 There is often a debate about which codes and standards apply when it comes to electrical safety of utility scale wind and PV systems. Of course OSHA is at the center of it all and the National Electrical Safety Code (NESC) is normally used for the substation, distribution and transmission portions. But what about NFPA 70E? Section 90.2 excludes certain installations, including those under the exclusive control of an electric utility system with certain conditions such as the installation being located on property owned or leased by the electric utility for the purpose of generation. There are other conditions that reference locations, easements and recognition by public service commissions and similar regulatory agencies having jurisdiction. This language often spurs a debate over whether NFPA 70E applies.

Regardless of whether a system is technically exempt from NFPA 70E or not, most wind and PV installations will also base their electrical safety practices on this important standard. Having to tell someone that was injured from an electrical hazard “sorry, this system was exempt from NFPA 70E” is not in anyone’s best interest.