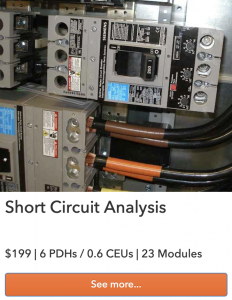 Background of X/R
Short circuit calculations are actually just an elaborate version of Ohm’s Law. One of the key components in the calculation process is to determine the total impedance of the circuit from the utility/source, through the transmission system, transformers, conductors, down to the point in question such as a panel or switchboard location. The impedances of the various circuit elements, have both resistance and reactance and is often referred to as the “complex impedance” or “polar notation”. A complex impedance value can be represented graphically by plotting the resistance along the horizontal axis and the reactance along the vertical axis. The total magnitude of the impedance is the hypotenuse of the resulting triangle. The X/R ratio is the amount of reactance X divided by the amount of resistance R which also happens to be the Tangent of an angle created by reactance and resistance in a circuit.

When calculating short circuit currents, there are usually many impedances that must be added together. Last month we determined how to calculate the equivalent source impedance and add it to a transformer’s impedance. I kept it simple by adding only the magnitudes. i.e. we added 5.75% of the transformer and 0.97% of the source and ignored the angles and individual X and R components. However, each of these impedances has a specific amount of reactance and resistance and an X/R ratio (even when calculated as a percent value). The problem with adding only the magnitudes of impedances is the total impedance will be artificially high leading to a lower (and incorrect) calculated short circuit current. This has the potential of creating a dangerous condition if an incorrect short circuit calculation leads to a mis-application of overcurrent protection. The diagrams below illustrates a comparison of adding impedances including magnitude and angle vs. adding the magnitudes only. 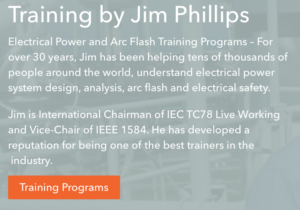 Let’s take the following example where we want to add the source impedance of 0.97% and an X/R ratio of 15 to the transformer impedance of 5.75% and an X/R ratio of 7. Before we begin, where did these X/R ratios come from? Quite often the X/R ratios are difficult to obtain. The transformer X/R ratio is usually not available unless you have good test data obtained when the transformer was originally built and tested. In the absence of actual test data, a good source of “reasonable” X/R data is from IEEE Std. 242 – IEEE Recommended Practice for Protection and Coordination of Industrial and Commercial Power Systems. This book contains a table of suggested X/R ratios based on transformer kVA size and voltage. The values are based on ANSI C57 which is the predominant standard for transformers. According to IEEE Std. 242, a 1500 kVA transformer with a secondary voltage < 600 Volts and a primary voltage of up to 15,000 Volts, the suggested X/R ratio is 7.0. This means that there is 7 times more reactance than resistance in the transformer impedance.

Total Impedance Z of the Source and Transformer

Breaking the impedance into R and X components, the correct impedance is 6.7174%. This is so close the original 6.72% from last month, you might think this isn’t really worth the extra effort. For the case where the X/R ratios give angles that are close, there is little difference between the two methods such as our case where we have an X/R of 15 which is 86.1859° and 7 which is 81.8699°. In most cases, however, there is usually a greater difference in angles such as when factoring in smaller transformers and low voltage conductor.