The surface area of the earth is approximately 197 million square miles, and IEEE 1584—IEEE Guide for Performing Arc-Flash Hazard Calculations has been covering more of it every day since it was first published almost 11 years ago. Although the IEEE 1584 standard has its roots in the United States, it has gained widespread international use as the most common method for performing arc flash calculation studies.

It wasn’t always that way. IEEE 1584 had humble beginnings when a group of dedicated people conducted hundreds of arc flash tests that ultimately led to the standard’s development. At first, the use of IEEE 1584 in the international community was primarily limited to North American companies with operations in other countries. Corporate policy often dictated that arc flash studies would be required at all facilities, including overseas. This is how the awareness of the arc flash hazard and use of IEEE 1584 slowly began to spread across other continents. However, it was still not widely known outside of North American-based companies 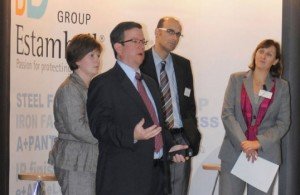 Increasing Global Awareness
It became clear that an even greater global awareness of the arc flash hazard was necessary, and it has involved many people, organizations and conferences. For example, back in 2007, a colleague from the United Kingdom invited me to co-author a series of articles to raise awareness about the arc flash hazard in Europe where it and IEEE 1584 were still largely unknown. The articles managed to elevate the awareness; however, there were also unintended consequences, especially in the United Kingdom.

Although people unfamiliar with the subject of arc flash met it with quite a bit of curiosity, the general consensus was plain: it was perceived as an American problem. There was a common belief that we had a very different electrical safety culture in the United States and that working on energized electrical equipment was routine practice. It was believed this problem could not possibly exist in the United Kingdom.

The Great Debate
This perception began a debate about just how serious the arc flash hazard really was in Europe. A major conference held in London in 2009 was one of the first public discussions of the differences (and similarities) in arc flash protection philosophies in the United States, the United Kingdom and Europe. I was an invited speaker. An official of the U.K. Health Safety Executive (HSE)—the equivalent to the Occupational Safety and Health Administration—was also a speaker. Now it seemed the public discussion was about to be elevated to a whole new level.

As the conference unfolded, it became apparent that electrical safety practices in the United States were more stringent than the audience had realized. Then the discussion moved to how we perform arc flash calculation studies, establish electrically safe working conditions and use energized electrical work permits. There were some similarities in electrical safety practices on both sides of the pond. After all, everyone attempts to avoid the hazards associated with electricity.

After the conference, arc flash, or flashover, as the British call it, was now on everyone’s radar, as was a greater awareness of the arc flash hazard and the need for arc flash studies, or risk assessments, as they call them.

Subsequent work with key individuals led to the development of a commercially driven European Arc Guide to help the European community gain a better understanding of arc flash calculations and risk assessments. Now that we were on a roll, events took place in other European countries as the use of IEEE 1584 began to spread. I had the privilege of being involved in similar efforts in Asia and Australia, all in an attempt to raise the awareness of the arc flash hazard globally. And IEEE 1584 has been at the forefront of each event.

Next edition of IEEE 1584
Development of the next edition IEEE 1584 is well underway. Consideration is being given to its increasingly global use. (For more on the IEEE update, see “The Best Is Yet to Come.”) Across many different languages, cultures and ideas, when it comes to electrical safety, we all seem to have the same basic goal, and IEEE 1584 is there to help everyone achieve it.