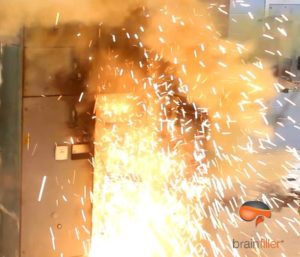 A question that I am often asked either on-line or in one of my arc flash training classes is in regards to incident energy calculations and line-ground short circuit current:

The short answer: No.

The longer answer: Let’s look at the equations for each short circuit calculation using symmetrical components.

The equation for calculating the three-phase fault current is:

The equation for calculating the line-to-ground fault current is:

All values are in “per unit”

For a frame of reference, if Z1 and Z2 are equal and  Z0 is also equal (which is not too common)

For this condition the calculated line-to-ground short circuit current would be:

In other words, the line-to-ground short circuit current would be the same magnitude as the three-phase case for this specific condition.

As mentioned, it is also possible for Z0 to be slightly lower than Z1 and Z2 resulting in the line-to-ground short circuit current being slightly larger than the three-phase current. One case where this can occur is at or near the secondary side of a delta-wye transformer.  This can occur near some generators as well.  In practical terms, this means the calculated short circuit current for a line-to-ground fault would be slightly higher than for a three-phase fault for this case.

So back to the original question.  If the line-ground short circuit current is slightly higher than the three-phase case, would the line-ground case result in the worst-case calculated incident energy?

For more about short circuit current calculations and symmetrical components, check out my short video.