A common question that I often hear in my NFPA 70E and IEEE 1584 Arc Flash Studies training courses is:

“Can simply operating a device such as a fusible switch or circuit breaker cause an arc flash?”

I respond to the question with a very specific answer which is: 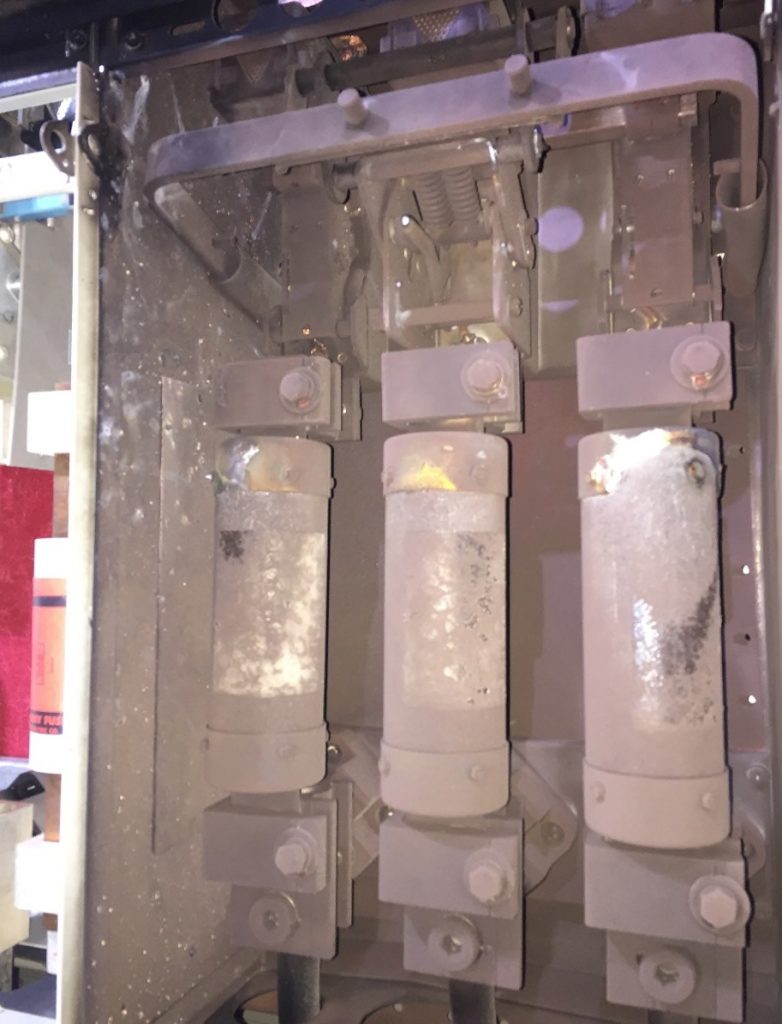 A good friend of mine here in Arizona has a client that found the answer the hard way. An electrical contractor was performing electrical work at their facility.  The work involved creating an electrically safe work condition at the 277Y/480 Volt main service switchboard following NFPA 70E 120.5 Process of Establishing and Verifying an Electrically Safe Work Condition.

The main service switchboard contained four separate mains as permitted by NEC 230.71 – commonly referred to as the Six Disconnect Rule. One of the mains was a 1200 Amp bolted pressure switch with 1200 Amp fuses that fed a downstream distribution switchboard in another room. As required by NEC 240.95, ground fault protection was also provided on the main since the disconnect exceed 1000 amps and was a solidly grounded 277Y/480V system.

The work began by interrupting the load by opening each of the smaller fusible disconnects at the downstream switchboard.  Once the load was interrupted, the 1200 Amp main was opened along with the three other mains. However, the line side of the mains in the switchboard remained energized – and still hazardous.

To completely de-energize the switchboard, the local electric utility company was contacted so they could come out and take their transformer out of service – completely de-energizing the main switchboard.  A very good decision! Once the electrically safe work condition was established and verified, the contractor successfully completed their work safely.

Restoration of power began with the utility placing their transformer back in service followed by the contractor re-energizing each of the four mains in the main service switchboard.  The final step was to restore power to the individual loads by closing each of the disconnects in the distribution switchboard – normally a routine operation.  Except, this time one of switches exploded in the contractor’s face.  Yes, an arc flash!

The good news (always looking at the positive) was although this could have ended tragically, the contractor was not injured – only rattled quite a bit. Why? Because he was wearing arc rated clothing and PPE during the switching.  Yes, all of the headaches of arc flash studies, wearing PPE, electrical safety training and more, paid off!  However, not everything survived.  In addition to the damaged switch shown in the photo, his hard hat and face shield would never be the same again. This example is a not so subtle reminder that wearing your arc rated clothing and PPE is all that stands between you and a devastating and potentially fatal arc flash should one occur.

What happened? It was determined that a latching mechanism on one of the downstream switchboard’s fusible disconnects broke and fell onto the line side of one fuse. When the switch was closed, an arc flash occurred which blew the 1200 Amp fuses in the upstream main service switchboard – the ground fault protection did not operate.

What are the Odds?

Electrical workers operate switches and circuit breakers every day without any problems. But, how do you know if today is the day that an arc flash occurs?  What is the risk?

NFPA 70E requires performing an arc flash risk assessment. Risk contains two components – the severity and the likelihood.  The severity can be determined by performing incident energy calculations. However, how do you determine the likelihood?  Rolling the dice is probably not the best idea.

To estimate the likelihood of occurrence of an arc flash, NFPA 70E Table 130.5(C) can be used which lists many different tasks including: “Operation of a circuit breaker, switch, contactor or starter” as in this case.    Each group of tasks includes another line item known as “Equipment Condition” which is classified as either “Normal” or “Abnormal.”  If the equipment condition is normal, an arc flash incident is not likely to occur.  If the equipment condition is considered abnormal, additional protective measures are required based on the hierarchy of risk control found in NFPA 70E which may include the use of arc rated protective clothing and PPE.

What is the difference between normal and abnormal equipment condition?  Table 130.5(C) states that the condition is considered normal if all of the following circumstances apply: (abbreviated descriptions)

(1) The equipment is properly installed.

(2) The equipment is properly maintained.

(4) The equipment doors are closed and secured.

(5) All equipment covers are in place and secured.

(6) There is no evidence of impending failure.

In hindsight it is fair to say the switch that failed was likely not properly maintained and although there may not have been any observable evidence of an impending failure, it did indeed fail – spectacularly! And the contractor was unharmed (and alive) thanks to wearing his PPE that made all the difference in the outcome.

Special thanks to Bill Hendrix of CEI in Phoenix, AZ for his contribution to this story.

This article is based on a previous version of my article published in the September 2019 Edition of Electrical Contractor Magazine.